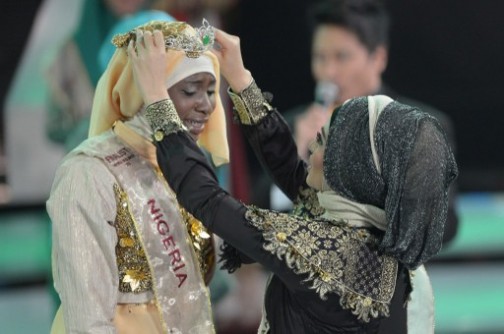 A Nigerian, Obabiyi Aisha Ajibola, tearfully prayed and recited Koranic verses as she won a world beauty pageant exclusively for Muslim women in the Indonesian capital Wednesday, a riposte to the Miss World contest that has sparked hardline anger. 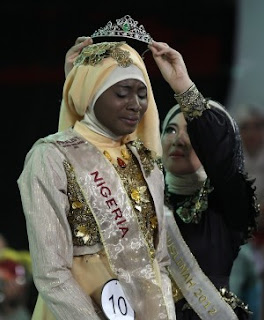 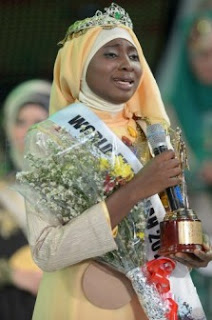 The 20 finalists, who were all required to wear headscarves, put on a glittering show for the final of Muslimah World, strolling up and down a catwalk in elaborately embroidered dresses and stilettos.
But the contestants from six countries were covered from head to foot, and as well as beauty they were judged on how well they recited Koranic verses and their views on Islam in the modern world.

After a show in front of an audience of mainly religious scholars and devout Muslims, a panel of judges picked Obabiyi Aishah Ajibola from Nigeria as the winner.

Eka Shanti, who founded the pageant three years ago after losing her job as a TV news anchor for refusing to remove her headscarf, bills the contest as “Islam’s answer to Miss World”.
“This year we deliberately held our event just before the Miss World final to show that there are alternative role models for Muslim women,” she told AFP.

Aisha received 25 million rupiah ($2,200) and trips to Mecca and India as prizes.

» BUSINESS THAT CAN NEVER FAIL YOU...CURSE IF IT DOES

» Cyclos365 Creditor - Tool That Can EXPLODE Your Bank Account Overnight